Do You Know the Father’s Delight?

The Father’s pleasure is so important: to know, to understand and to receive. Yet few of us live from it. We walk in the lie that we have to work for God to love us and enjoy us. We strive for His approval. There is something you’re missing if that’s what you think! The Bible says, “While we were yet sinners Christ died for us.” When did Christ die? Before we did anything! In fact, we were walking in the opposite direction of Him – shunning Him! Yet He gave His life for us on that tree to prove His love for us, His pleasure for us, His desire to have us.

So many times as Christians, we know the gospel and can sing the song “Jesus loves me” and believe He died, yet we live as orphans.

“I will not leave you as orphans, but I will come for you!” (John 14:18) Guess what?! He has come for us and adopted us into His family. In Romans 8:17 it states that if we are heirs of God then we are co-heirs with Christ! His blood flows through us.

I want to challenge you with the Father’s pleasure—to see how He already approves of you and to come to a place where you stop thinking, “What can I do now to make God happy with me or love me more?” I challenge you to instead walk out in the truth that you belong and are enough, and that His Love is never ending. “How deep and how wide and how long is the Father’s love for us.” (Ephesians 3:18)

Recently, I helped lead a missions trip to Peru, and there I had to choose to walk out in His pleasure and love for me. The first week, I struggled with feeling like I didn’t belong, fearing I would keep messing up, and that I was not good enough.

One day as the team went to another city, I stayed back with one of the students who was sick. I spent time with the Lord, listening to podcasts, reading the Bible and reading another book I had.

One of the podcasts I listened to was called “Rooted in Delight” by Melissa Helser. It spoke about living in the delight the Father has for his children. I have had to choose continually to walk in His delight and pleasure for me, and not what I perceive he is thinking of me—to look to scripture and not my current circumstances. What does the Bible say? “Greater love has no one than this: to lay down one’s life for one’s friends. You are my friends if you do what I command. I no longer call you servants, because a servant does not know his master’s business. Instead, I have called you friends, for everything that I learned from my Father I have made known to you.” (John ‭15:13-15‬)

Our last couple of weeks in Peru were spent in the city of Iquitos and in villages along the Amazon River. While we were there, we made a friend named Job. He was a gifted guitar player who loved music, however, the guitar he owned was not a very nice one.

As someone on the team was praying for him, the Lord prompted her to give him money towards a guitar. Another one of our team members, after talking with him, found out he had been praying for a new guitar for a long time. Our team came together and took up an offering among us to buy him a guitar.

That evening we presented Job with His new guitar and all the accessories he would need. As I was standing there watching him open the case with glossy eyes,  I could feel the Father’s pleasure for Job. Job was overwhelmed. Taking his new guitar he began singing to the Lord. It was beautiful.  Nothing Job did made him deserve that guitar, he simply asked the Father for one. And because of His great love for Job, God moved on the hearts of people from a different country to buy a 16 year old boy a new guitar.

Later as I was sitting in our hotel room, I came to a fork in the road: a choice I had to make. Was I going to walk in the truth of the Father’s delight or strive for something I already have? I stood, opened my hands and prayed. I repented for not seeing myself the way God does and not seeing I was created in His image. God reminded me of the power of words and I began to verbally receive His love. It was scary because I had to lay down my pride and the way I saw myself so I could align my heart with the way He sees me.

It wasn’t an easy thing. I had to continually choose the truth—to take captive any thoughts that didn’t line up with what He says, the Bible says, and what the cross proves.

Are there lies you have been believing about the Father?

Take time to ask God, “are there areas in my heart that are not aligned with the truth of the Father’s character?” Recognize those areas and replace the lies with the truth of who the Father is. It’s important to receive His grace to continue in that truth, even when it’s hard to believe. Remember that, “there is therefore now no condemnation for those who are in Christ Jesus.” Romans 6:1a

Now you have that choice to make: will you take your heart before the Father, letting His truth realign you to His delight over you? 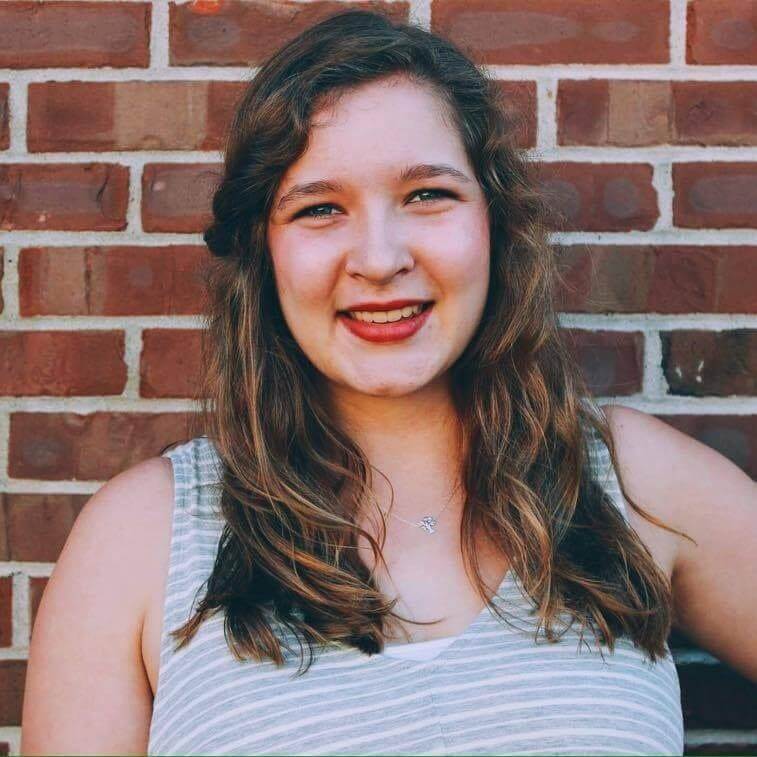 Lizzy Boettcher Cambridge, Minnesota
If you’ve seen Lizzy’s steady spirit and tireless work ethic, you won’t be surprised to learn that she grew up on a midwestern farm. Around here you’ll see her tackling whatever task she’s given with her signature farm-girl grit. Lizzy is deeply committed to people and serves from her heart with thoughtfulness and generosity. She genuinely desires to love and welcome others, so you’ll quickly feel at peace when you’re with her. Just don’t ask her what’s involved in making sausages from those pigs her family raises. You don’t want to know.